Occasionally, a mushroom or set of mushrooms pops up out of seemingly nowhere in our yard. I've done very little research on mushrooms so I don't know much about them, except they're considered a "fungi".

This set of golden colored mushrooms appeared in the dirt path near out patio area in the backyard. I decided to see if I could identify it through google search and I gathered a few tidbits of information about it. Known as the American Eastern Yellow Fly Agaric (Amanita muscaria var. guessowii) mushroom, it is a large yellow variety of one of the most recognizable mushrooms in the world. It is widespread in North America and common in the northeastern United States. 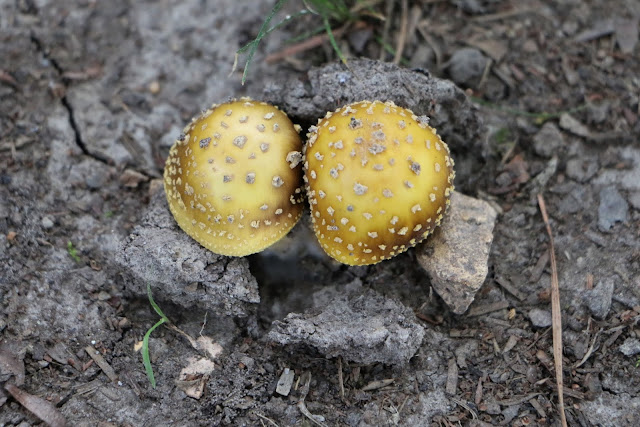 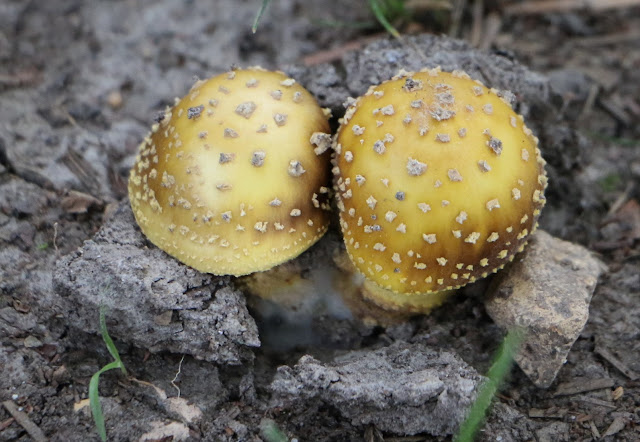 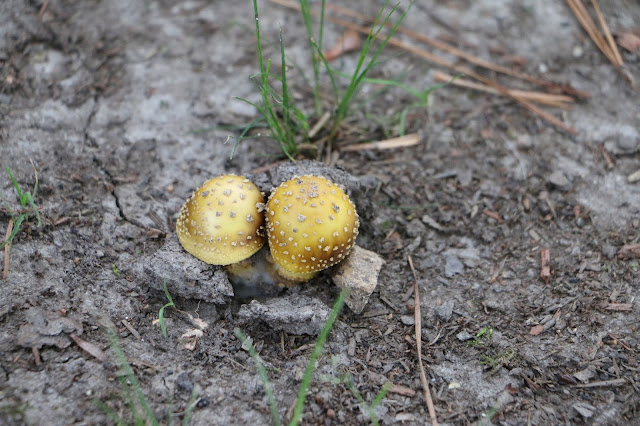 It occurs in coniferous, deciduous, or mixed woodlands, woodland edges, and among planted trees. It is found from June to November, solitary, scattered, in groups, or in fairy rings, on the ground under pine, spruce, fir, aspen, or birch trees.

This mushroom is poisonous.  It is estimated that about 90% of mushroom-related deaths involve Amanitas.  Fly agaric contains the hallucinogens muscimole and ibotenic acid.  In some parts of the world, Amanita muscaria is still used as an insecticide.

These insects are often called "bush crickets" and are noted for their nocturnal mating calls. Katydids are also known for their large hind legs and extremely long threadlike antennae and the thick, upwardly curved ovipositor (egg-laying structure) of the females.They belong to a group of about 6,000 species in the cricket family. Katydids are widespread and are typically found living in grasses, trees and bushes, often matching the appearance of their surroundings.

I stopped watering my plants the other evening long enough to take a couple of photos of this katydid. I noticed it was different from other katydids I'd seen because of the brown colored "triangle" on its upperpart. From my research, I gleaned that this katydid is called a Rattler Round-winged Kaydid and it belongs to a major group of katydids known as false katydids and a sub-group called round-headed katydids.

The Rattler Round-winged Katydid is common and often found in shrubs at or below eye level. Known as an excellent leaf mimic, it seems to frequently sit in the open so it is easier to find than many other katydids. It produces a rattler sound when it sings at night, hence the name that was pinned to it. This katydid usually begins singing around the middle of July. Adults are very susceptible to frosts and do not survive the first couple of freezing nights.

In this crazy crazy world we're living in, it's good to escape to a place of serenity to just take in a few deep breaths and relax. Seek out something beautiful among the ashes.

They’re everywhere- these long-legged creatures that, until a couple days ago, I thought were actually spiders. In recent years I’ve come to fear them less than I did as a child, but I still feared them regardless. Many of us have heard the scary tales about these “spiders”, especially the one that made us believe that “they are some of the most poisonous spiders in the world, but they can’t bite us because their mouths are too small”. Come to find out, they’re basically harmless, to us anyway.

While taking photos in my backyard the other day, I noticed one of these “spiders” on top of my roses. I took a few close-ups out of curiosity. Later that evening, I googled “daddy long legs spider” and was surprised by what I learned. There are actually 2 different creatures that carry the nickname of daddy long legs.

The daddy long-legs spider is the cellar spider. There are approximately 34 species of cellar spiders in North America. These spiders belong to the family Pholcidae. They are commonly found in cellars, basements, sheds, garages and similar structures. Like other spiders, the cellar spider has 2 basic body parts- the cephalothorax and abdomen, 6 to 8 eyes clumped together, 8 legs and creates stringy webs from silk. They have short fangs and do produce venom, but not enough to cause harm to humans with the exception of local mild redness to the skin.

Another creature that is called daddy long-legs belongs to a group of arachnids called Harvestmen. They’re related to spiders, but do not have the physical characteristics of spiders. Harvestmen have only one basic body which looks like an oval or round “pill”. They have only 2 eyes which rise above their main body, do not produce venom or silk, do not spin webs and do not have fangs. The common physical trait they share with cellar spiders are the 8 long legs. Harvestmen are usually found under logs, decaying leaves or around rocks. They prefer a moist environment and feed on decaying vegetative and animal matter.

Now that the confusion about daddy long-legs is cleared up in my mind, I’ll be less likely to jump and squeal in terror if one of them happens to crawl or fall on me. Plus, I can educate others who believe these creatures are among the most poisonous in the world. My new knowledge may even help save the life of a daddy long-leg ;)

By the end of May, the Hosta plants had produced tall stalks of flowers...

The Queen Anne's Lace was blooming everywhere at the edge of the woods...

The Mimosa trees were in full bloom with their pretty pink fluff balls...

The Foxtail Ferns were growing back...

The white Begonias that I planted were growing rapidly...

and the new Lantana plants that I set out were thriving...

Everything looks so healthy and vibrant.

An immature male Summer Tanager dropped in for a quick bath. If you're a bird watcher then you'll understand my excitement when I just happened to be close enough to take some pretty descent shots of this gorgeous bird. I rarely get the opportunity to even see one of these in my yard, let alone get close enough for pictures. Summer Tanagers mainly hang out in tree canopies and swoop out to catch bugs and insects in mid-air or glean tree branches for the same. They also raid wasp nests and such. Wasps are one of their favorite snacks. The mature males are almost all bright reddish-orange and the females are yellow. Isn't he gorgeous?!!!

Our gorgeous spring blooms in May: 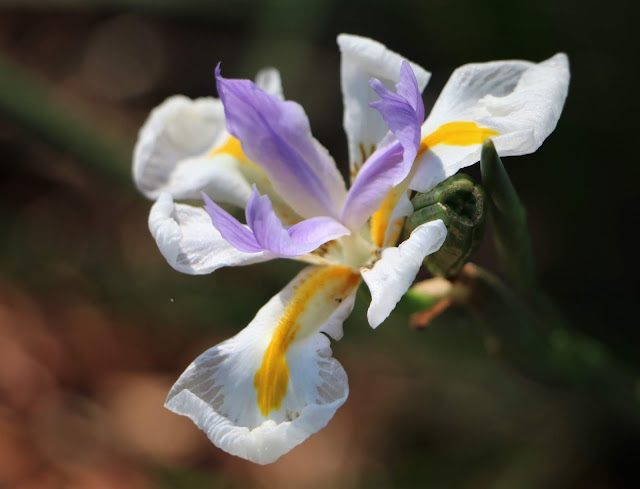 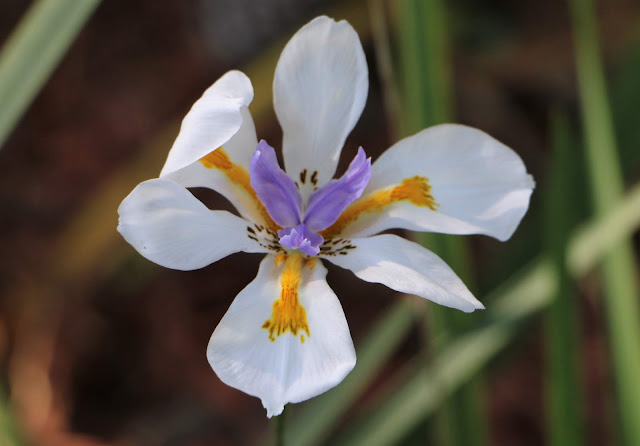 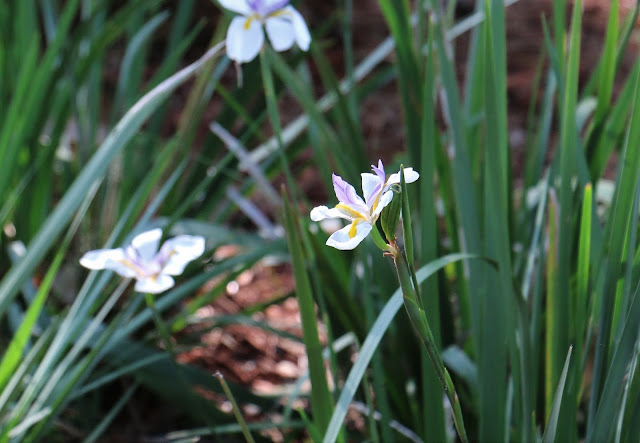 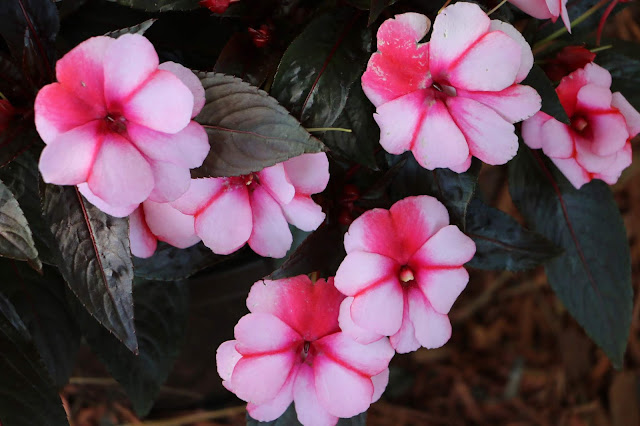 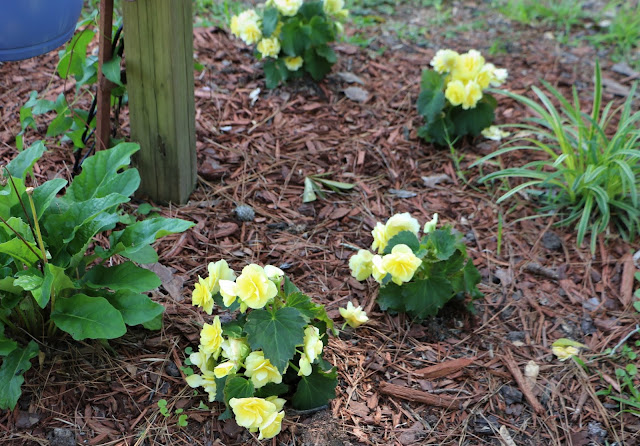 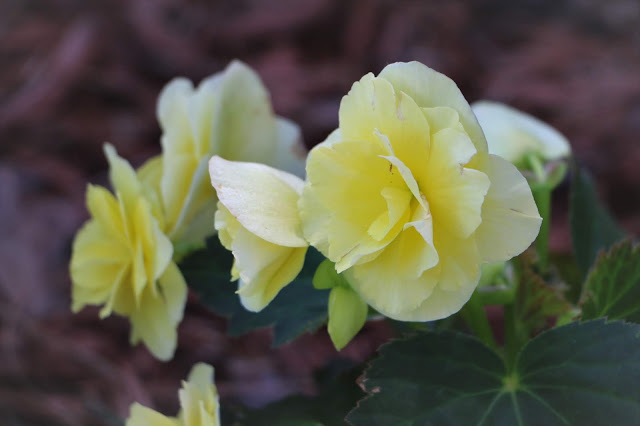 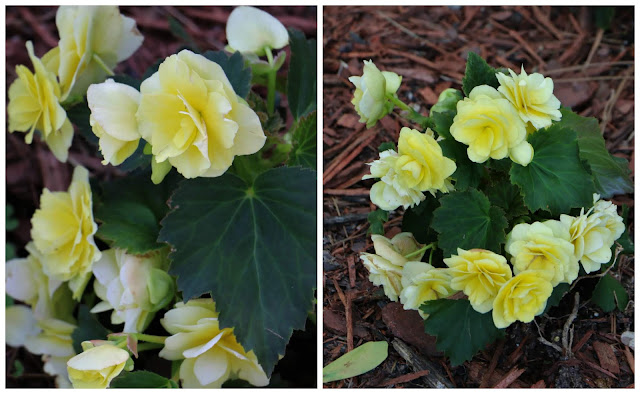 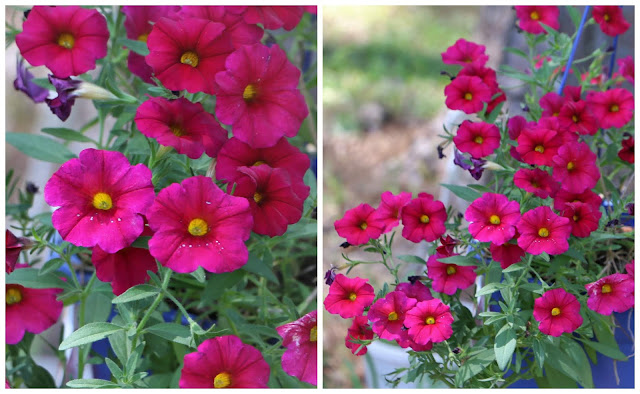 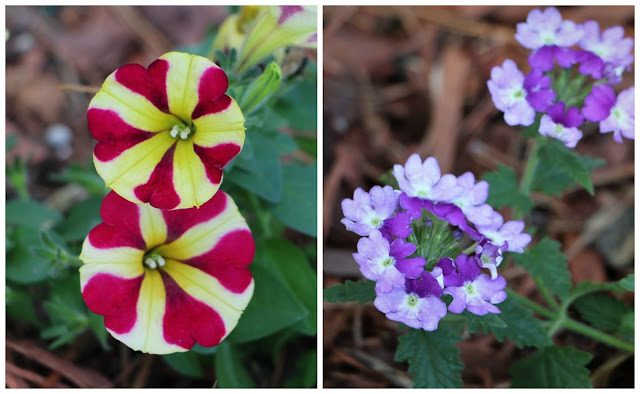 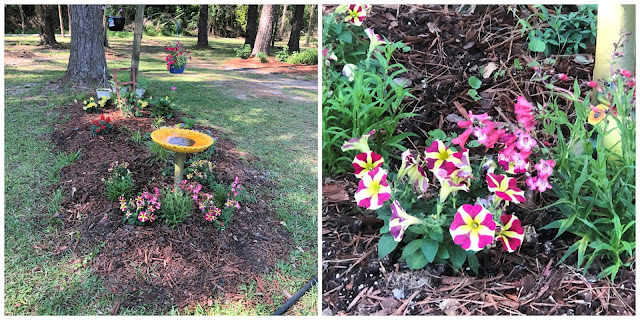 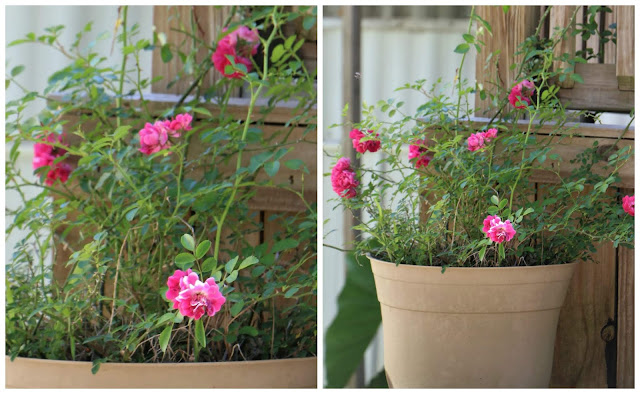 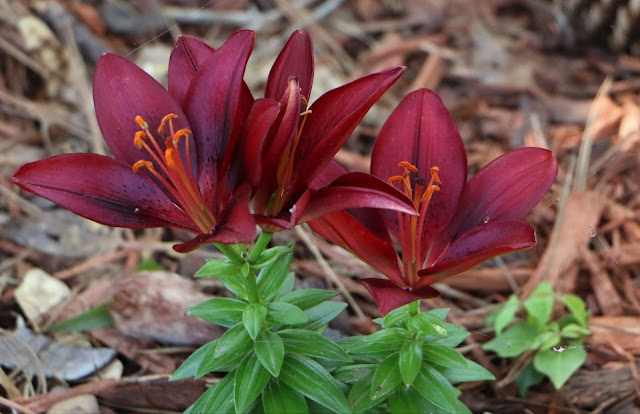 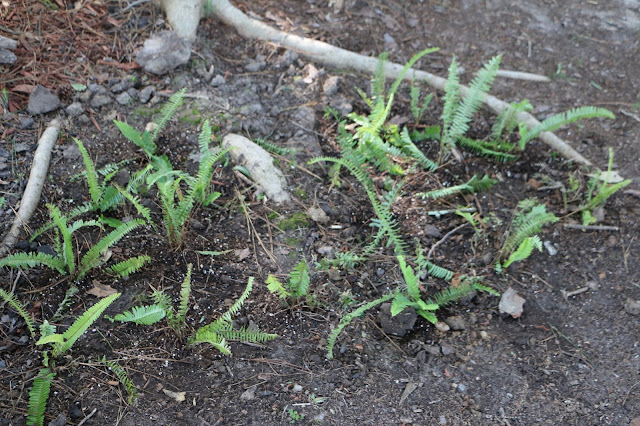 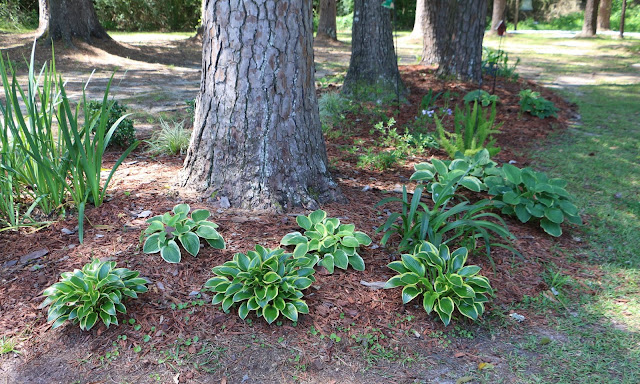 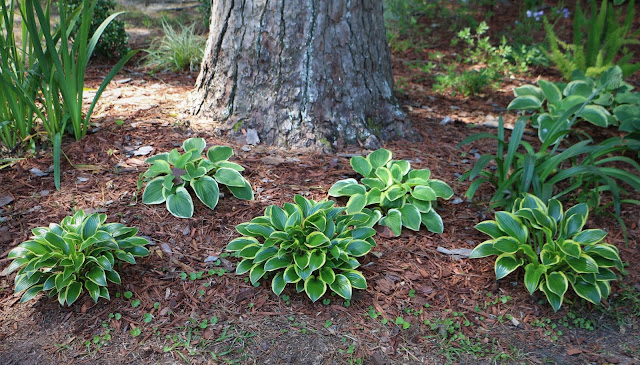 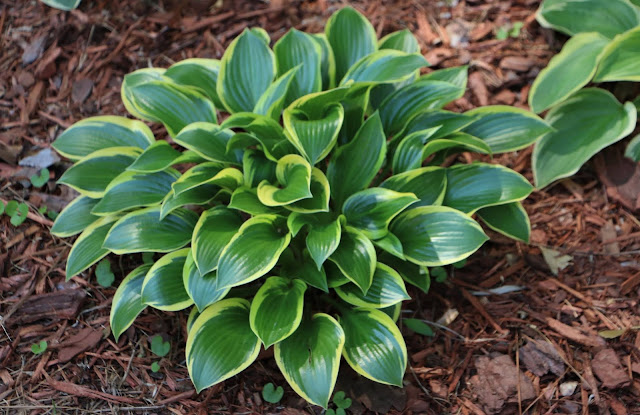 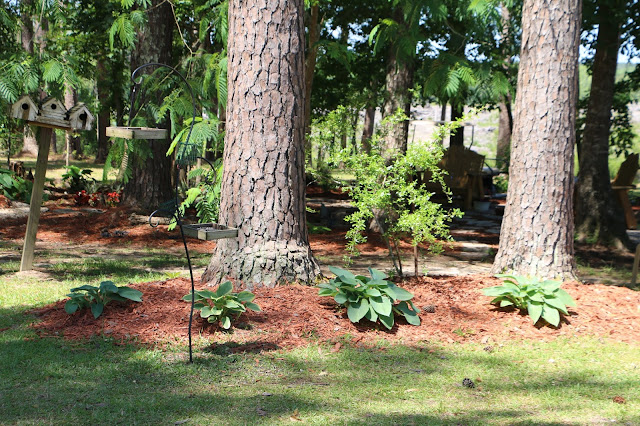 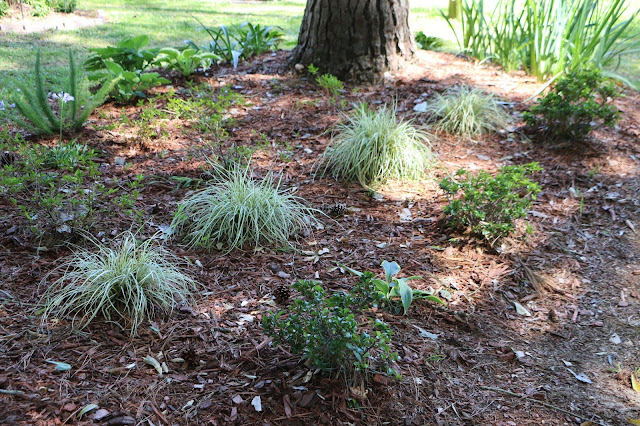 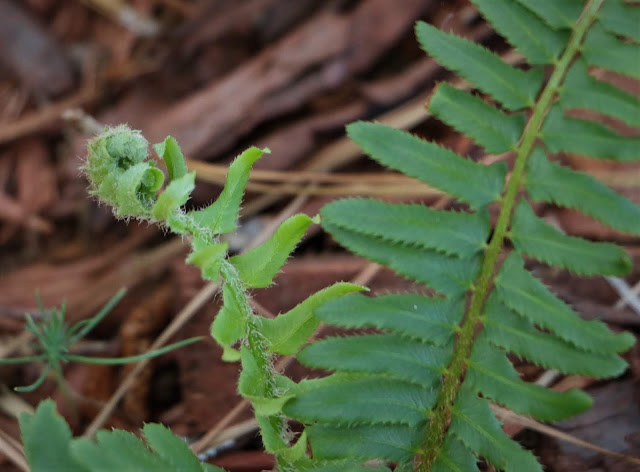 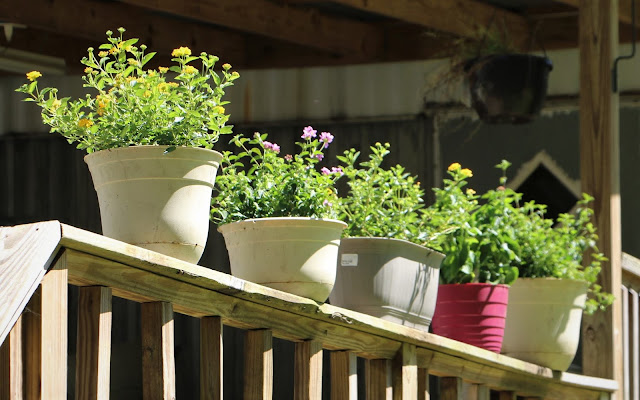 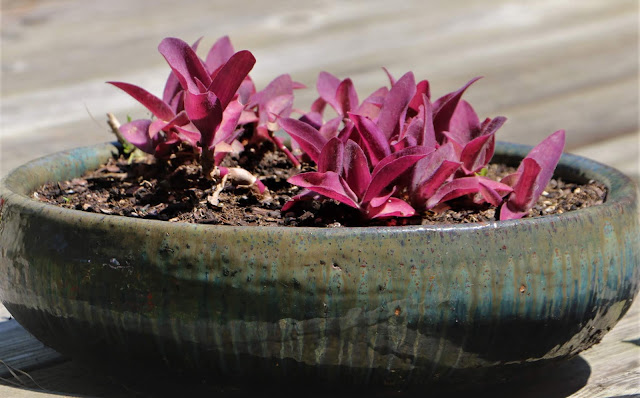 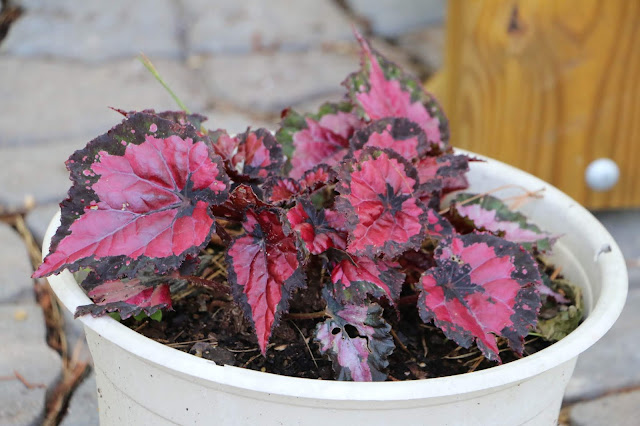 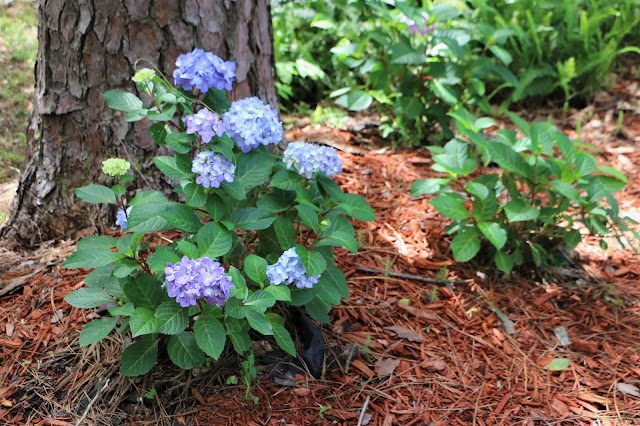 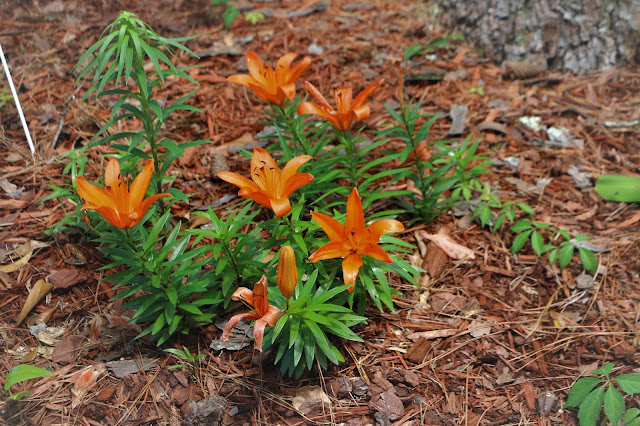 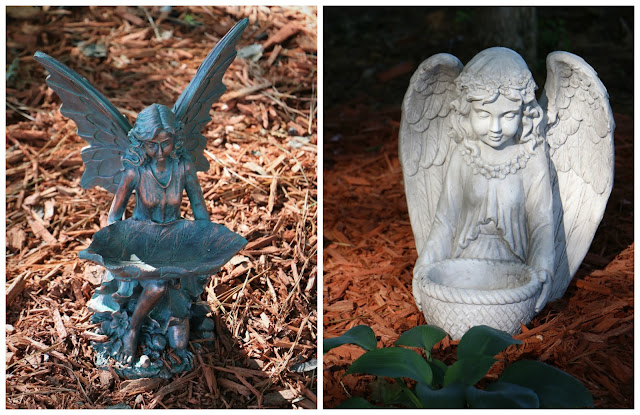 A Breath of Nature

Promote Your Page Too

"I go to nature to be soothed and healed, and to have my senses put in order"